Thus the E-100 will be one of the rarest tanks in the game and the only special one at rank 5. The first two tournaments will take place in the beginning of January and will be available to the Thunder League “Dog Tag” owners only. E-100 is a gift rank V German heavy tank with a battle rating of 8.0 (AB) and 7.7 (RB/SB). It was introduced in Update 1.53 'Firestorm' and has the distinction of being the second Rank V gift vehicle in-game, with the first being the La-174. The E-100 could only be obtained in the special tournament events, making its acquirement rare to the point of being one of the rarest tank in the game.

The E-100 could only be obtained in the special tournament events, making its acquirement rare to the point of being one of the rarest tanks in the game. It was first available in the 'Teutonic Giants' tournament held from a time span of January to March 2016. It was made available again in War Thunder's 5th Anniversary tournaments, then again in the War Thunder's 6th Birthday tournaments.

The E-100 looks like a more sleek version of the Maus, or perhaps a more practical one. The two share the same default camouflage scheme of the yellow Dunkelgelb and green olivgrün paint. The two super-heavy tanks also share the same turret design with the 128 mm primary armament along with a coaxial 75 mm and machine gun. The big difference in design though is that the E-100 has a turret at the centre of the tank hull, making it unable to really cover the engines. Also, the side armour that is curved makes this Super Heavy tank a rare one. 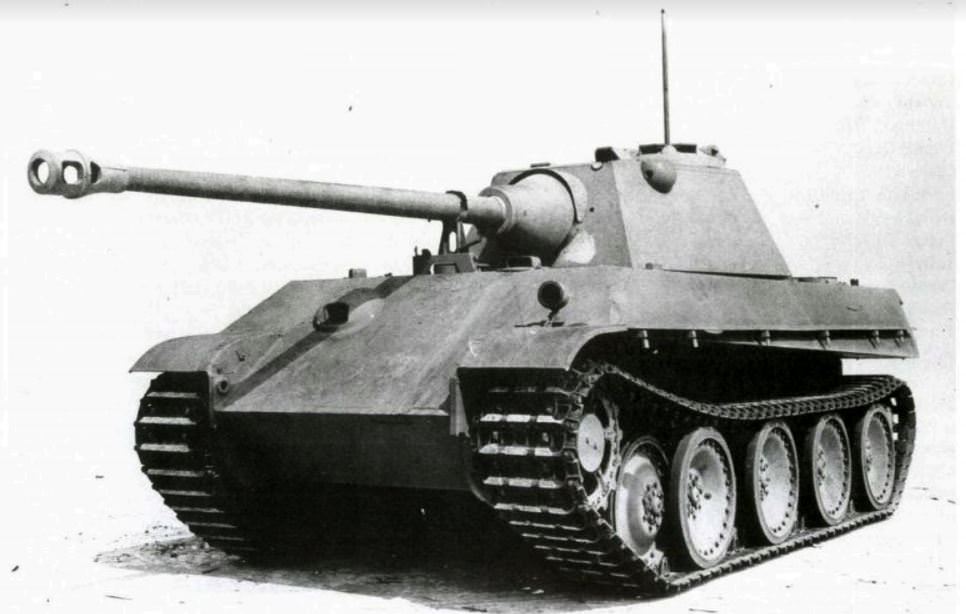 The E-100 presents a more sloped frontal armour that is more effective than the Maus', the downside in the design is the lower front plate that is thinner, not to mention that it is a big target. The overall design of the tank makes it very resilient against bombs and artillery, to the point of surviving to bombs falling beneath it.

The side armour on the E-100 is also slightly more effective than the Maus. On the Maus, the huge flat side skirts make up part of the side hull armour. On the E-100, the side skirts are completely separated from the main hull and are 75 mm thick sloping, which adds up with the 120 mm flat side hull plate. This feature makes the E-100 able to defeat lesser rounds from low calibre guns. However larger rounds will still be able to penetrate the side skirts with ease, even chemical shells. The skirts can be destroyed after taking enough damage which reveals the very weak side armour of the tank. It should also be noted that shooting between the tracks is a very valid method to take out the E-100 as the armour is extremely weak there.

The rear armour between the two heavy tanks are roughly the same effectiveness, but the E-100 rear slopes inward similar to a Tiger II design while the Maus remains all clunky. However, while the Maus engine is in the centre of the vehicle and the transmission is one the back, the E-100 is switched with the engine in the back and transmission in the front, so a penetrating hit to the rear can hit the engine and also set it on fire.

Compared to the Maus, the E-100 truly shines here better than anything else in differences. It weighs 38 tons less than the Maus and the effect in speed is noticeable, able to go nearly twice as fast as the Maus and is more manoeuvrable. The tank only reaches his top speed on a downslope, its cruise speed being 24 km/h in a straight line, and if not taking terrain into account, it can theoretically reach speeds up to 40 km/h. The reverse speed being half the Maus' makes it average compared to other heavies of that rank. Despite that, the improved mobility gives the E-100 the ability to redeploy on the battlefield and react faster to potential threats.

The usual unlocks should be made. In Tier I, Parts should be unlocked first to access Tier II, which then should unlock FPE and the PzGr 43 ammo. Tier III should focus on Elevation Mechanism and Filters. Tier IV should focus on the Engine for better mobility. Researching Tracks quickly makes the E-100 much more enjoyable.

Like the Maus, the E-100 carries the 128 mm KwK 44 gun that can annihilate anything it penetrates.

The E-100, like the Maus, also has a coaxial 75 mm with HEAT ammunition for lesser targets so the limited 128 mm shells (42 of them) are not wasted. The 75 mm also can fire smoke round so it is possible to keep a secondary ready with smoke while moving around with an AP round in the main gun.

The E-100 is played similar to the Maus, with the same armaments and similar armour rating. However, the E-100 has the benefit of increased mobility due to its improved chassis. The E-100 can thus be somewhat more suitable in moving from cover, but close quarter combat is still not recommended due to its still relatively slow movement, long reloads, and the lethal anti-tank armaments the other Rank V vehicles are bound to have, including the now prominent Anti-tank guided missiles. In a down-tier, the E-100 can be played much more aggressively and has to put pressure on the enemy team in order to be impactful. The psychological factor makes it easier to achieve this goal as this tank is a very feared foe and can, in fact, turn the tide of the game. However, down-tiers should be taken seriously as your enemies will be focused on taking you out. Picking the right targets is also something that an E-100 driver has to master to get good games. When facing light and an armoured target the main gun should always be used to destroy the strongest tank while the 75 mm gun takes care of the squishy one. Even when facing weaker opponents the turret has to be angled between each shot in order to avoid shot traps. When the E-100 gets an up-tier you should get to cover as quickly as you can and play it extremely carefully as any shell may be enough to take you out or at least cripple you. The 128 mm is not as effective as you now have to aim for weak spots on tanks like the T-55AM-1 and the 75 mm should become a smoke dispenser.

Late in World War II, Germany started a project meant to standardize their tank designs. A similar attempt at this started in 1943 with the Panther II, which would use parts from the Tiger II to simplify construction, but this fell through with the cancellation of the Panther II. The new tank standardization project was known as the Entwicklung series, or the 'E-series', and was meant to fix the issue of poor production quality and increase the production rate. The series was named with 'E' followed by the weight classification of the design which would also indicate its role. E-5, for example, would be a vehicle between 5-10 tons and would be the basis of new light tanks. The series followed with the E-10 (tank destroyer), E-25, E-50 (medium tanks), E-75 (heavy tank), and the super-heavy E-100. Aside from standardization in parts such as the wheel (which was the Tiger II's design), the E-series does not provide many other improvements to existing armour designs, an example is that the E-50 and E-75 series are essentially a redesigned Panther and Tiger II respectively.

Of the designs, the E-100 was the most radical in terms of design. The E-100 was proposed to be the basis of heavy artillery, anti-aircraft, tank, and tank destroyer on the battlefield. The design concept began alongside the super-heavy Maus in June 1943 and was intended that the design would use components from the Tiger II and the Maus turret. In March 1944, Henschel submitted the blueprint of the design, which would use the Maus turret and parts from the Tiger II, namely the turning mechanism and transmission. The design proposed the usage of a 700 hp Maybach HL230 used in nearly every German heavy tanks or a newer 1200 hp Maybach engine. The difference in the design from the Tiger II basis was a 90 cm diameter road wheel and spring suspension rather than torsion-bars. The turret was to be a new design different from the Maus, in that it is simpler and lighter.

However ambitious the project was, Hitler ordered in July 1944 that work on all super heavy tanks be cancelled. However, the E-100 was still developed with low priority, only three Adler workers were reported to have been working on the prototype after the order. The prototype was never completed and in April 1945, the American 751st Field Artillery Battalion captured the prototype, of which was simply the hull with the roof barely completed. The prototype was sent to Britain by the British Army for evaluation before being scrapped.